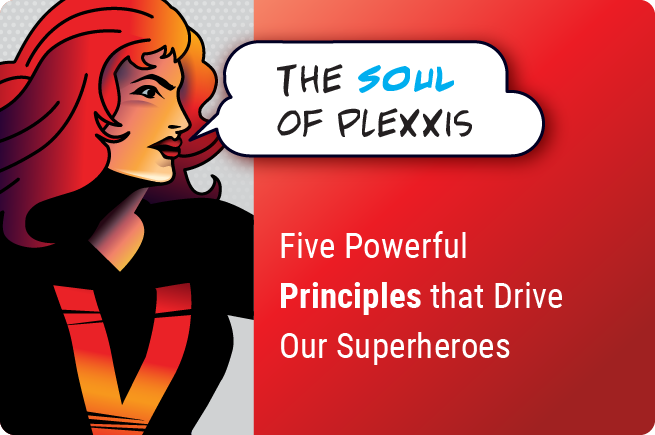 Yet these are merely exterior [semi]-mortal manifestations. When you dig a bit deeper, there is of course so much more that comprises their character, strength, and magnetic appeal.

At Plexxis, the superpowers of our amazing super people present not on the surface nor in the striking manner of our dress. They manifest deep under the skin.

We call it the soul of Plexxis. It is a belief system – a rare character and a commonality of inner strengths that propel our company forward.

It’s what fuels us and makes our people unmistakably unique, larger-than-life and instantly recognizable from lesser beings you may encounter elsewhere.

So, what truly lurks in the soul of Plexxis? Let’s explore!

No man—or woman– is an island. Truth is, not everyone is good at absolutely everything.

Being successful at Plexxis requires a realistic understanding of who you really are – where your strengths and weaknesses lie, and how that can ultimately impact and enable your team of “avengers”.

Even the greatest superheroes have their “kryptonite” – limits and vulnerabilities to their talents that can block their powers and prevent them from saving the day.

The challenge many of us face is really knowing where we truly excel, and where we require a little extra work – or a little help from coworkers.

“The most important part is self-awareness — being open and honest about where you’re strong and where you’re weak. You can achieve that vision of both protecting and serving the team by doubling down on your strengths, protecting the team, but making sure that your weaknesses don’t impact the mission,” says Chris Loranger, CEO

At Plexxis we uphold the moniker of “Build Truth”. It is more than a statement. It’s something that guides our actions, fires our heart and drives our ethics on a daily basis.

Sales Director Chad Pearson explains, “Build Truth” began as a movement within the construction software industry. Now, it’s taken on a life of its own and evolved as an internal tool to keep us accountable and honest every day”.

Building truth, he adds, is a mission everyone at Plexxis embraces in order to make the industry a better, safer place.

But truth at Plexxis goes farther than sales transparency and ethics. It’s a mantra Plexxis people live by which guides their conduct and colours their every interaction.

“Building truth is being brutally honest about expectations. even when you’re providing, say, bad news to a customer in a constructive way, says Ali Abbas, lead programmer, ERP.

“Where I have made a mistake and I have had the courage to call the client at like 12 in the night saying look, this is what happened. I’m sorry. I know this happened, but I can’t go to bed till you know about it,” says Farrah Merchant, programming coordinator. She continues:

The same holds true in daily interactions with colleagues… it’s about building open and honest relationships. Being able to tell someone I need help or, how you’re explaining it to me isn’t helping me to understand better. Maybe we can approach it at a different angle?

It takes true strength of character to convey less favourable news and truly honest feedback. But Plexxis people possess this in abundance.”

Plexxis CEO Chris Loranger personally embodies this commitment to truth that has become central to Plexxis’ core values. Originally a small-town Ontario dairy farmer, he imbues those wholesome country values and champions truthfulness in his organization.

“I’m a pretty straight shooter. I really don’t hold back. I always found (it’s best) if you tell people where they stand and expect the same from them.

I find that when people tell you what you need to hear, you have an opportunity to change… adapt. You can do something with that.

But if somebody is just ‘blowing smoke’, at the end of the day, you’re literally going to believe your own BS. So, surround yourself with people who tell you not what you want but what you NEED to hear.” Chris Loranger CEO

Dull, drab or average don’t live at Plexxis. Nope.  No such address!  Some say there is no such thing as boredom – just boring people. Plexxis people would concur with that! Inner drive, engagement, and passion are qualities that rage in the heart and soul of every individual at Plexxis.

“It’s one of the most driven organizations that I’ve ever experienced or been a part of. I feel pretty blessed about it every single day. It’s definitely a treat to come to work and deal with the challenges that come up knowing I have the right team behind me. It’s awesome,” says Ali Abbas, lead programmer ERP.

That passionate, hardworking ethic at Plexxis is fueled by another quality: A positive attitude. Positivity is the spark that ignites our projects, teams and daily work experience.

“I would definitely say, positivity, again, I encourage it in people, and I get a lot of it back. I see that a lot in our team: positive achievements, positive growth, hard work. It’s huge,” says Fiona Locke, resource manager.

“We’re able to crush our goals, really. When everyone is giving us 110%, they make it look so natural. It really is a superpower… as if anything less would not be enough.”

Speaking of positivity and unstoppable momentum, you’d be hard pressed to find a better example than Sales Director, Chad Pearson.

On the subjects of drive, embracing change and that passionate pursuit of excellence:

“If you maintain that mentality of always pursuing, like relentlessly pursuing excellence, when times get tough, that’s when you can start to really shine. The other one that I personally love is embracing change. The reason why I personally love that one is because again, going back to the second wind behind me. With this level of volatility in the world, it’s almost a bare minimum to survive,” says Pearson.

Devote quality time getting to know Plexxis and you will find a unique group of talented people who realize this: Together they are stronger than they are apart.

The Plexxis belief system flies in the face of the status quo. That pervasive trend of ‘remote working’ that is transforming the world of work right now. It’s simply not for us.

At Plexxis, we believe a transition to a remote working model would drive us farther apart, rather than bring us together. It would not serve the greater good.

As Chad explains, Plexxis is driven to do quite the opposite of what the run-of-the-mill software company is doing:

“High collisions, embracing conflict, staying together, and living and working under a strict code… as opposed to a more flexible code: that’s the soul of Plexxis,” he says.

“We are literally zagging when the whole world is zigging. While everyone else is going in more of an accommodative, flexible, remote working direction, we actually feel quite firmly that not only is it wrong, but in the future, it will lead to high levels of depression and anxiety. That’s how passionate we are about sticking to the attributes of sharing the same space and maintaining that family type culture.”

CEO Chris Loranger expands on the importance of closeness to the belief system of Plexxis:

“We believe when people hang around each other, they can build loyalties and become a true family. It’s In those loyalties and connections that you get a lot of life satisfaction, and it’s not always, driven from a financial perspective…”

Tristan Boyd, a Full Stack JS Developer at Plexxis, weighs in on the positive impact of “connectedness” on innovation:

The final defining element in the soul of Plexxis is perhaps the most important of all. It has nothing to do with scintillating intellect or superpower skillsets. It pertains to the ‘character’ of the person itself.

“Being a girl from India in North America, I wouldn’t have been this confident had I not been working for Plexxis, says Farrah Merchant, programming coordinator.

“Pretty much it’s all about being a good human here. Plexxis is where it is because we are a collection of good people. It’s goodness or diversity… and everything else.”

“Integrity – that is literally my favorite word in the world, says Loranger.

“Integrity. Authenticity and genuineness – you will fail without them. When you ask what we brought from the farm, my dad had always told me, I have one thing and that is my word. When we said we’re going to do something, we did it because at the end of the day, if you came back to see that person having not kept your word, they’re never going to believe you again,”

When you think of Marvel superheroes you usually think of their special strengths. Their web shooters, magic shields and invisibility cloaks.

At Plexxis, we believe our superpowers — our ability to defy client expectations, or to deliver on a new release, all come from these rare qualities within: Self awareness, truth, passion, connectedness and integrity. Ultimately, it is these attributes that allow us to embark on an extremely exciting mission:

“We will chase perfection… and chase it, relentlessly knowing all that all the while we can never attain it, but along way along the way, we’ll catch excellence.” says Ali Abbas.

Do you possess the soul of a superhero– and feel you would be a great fit at Plexxis?

We would love to hear from you.