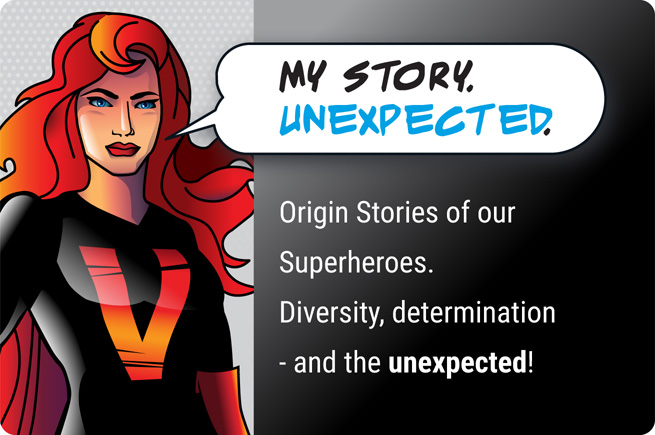 From Spiderman and the Green Hornet to Batwoman, every superhero has an origin story: A gripping tale around the genesis of their powers and how he/she became driven to fight crime. Often these stories are inspirational. They paint a picture of how an individual can overcome adversity, seize on opportunity and ultimately triumph – no matter who they are or where they are from.

A lot of us love these origin stories because they demonstrate the precise moment when an ordinary person transforms from being ‘just like us’… to becoming better, faster, stronger. In fact, we draw a heap of inspiration from these rousing tales. Could we ever become superheroes too?

Certainly, the superheroes of Plexxis have their own unique origin stories. No-one arrived here as a cookie cutter tech expert, or a construction industry software developer. In fact, most of us have been that “just like me” person… able to step into their superhero powers upon joining forces with the Plexxis team.

Every one of our colleagues has a fascinating background – an unexpected story. Everyone brings something extraordinary to the table here at Plexxis: a skill, talent or a disposition shaped by a myriad of life as well as work experiences. Listen to one of our Full Stack JS Developers, Tristan Boyd –

This commitment to hiring ‘outside the box’ also extends to our entry level individuals. Take the case of Ali Abbas who joined Plexxis right after school:

“Honestly, I didn’t even know about Plexxis before joining. My brother was actually doing a high school co-op there and, once I graduated from university, he suggested that I apply.

“In my initial interview it was pointed out that I had a lack of experience, and my resume wasn’t very good. They felt, however, that if I was anything like my brother, I would be a great fit.  Fortunately for me, I got the opportunity. Fortunately, as well, I turned that opportunity into an amazing career. Eight years later, here I am.”

Although known for its innovative software development, not everyone in Plexxis has tech skills or software experience. In fact, some of our best team players come from completely different industries. Take Monique Mehew, our dynamic and unstoppable national sales rep. On meeting Monique and seeing her unique character, it was apparent to our CEO and director of business development, that she would be a great fit at Plexxis.

From chance meetings at airport bars to connections that go way back, some of our Plexxis people share a long history with the founders. We have great team members who were lured away from other exciting careers to join the company. Such is the story of Paul Glinker, our brilliant programming lead.

“From grade two, all the way until the end of high school, the founders of this company and I were childhood friends. We lost touch. Then, we bumped into each other by chance in a computer shop in Mississauga, says Paul.

They asked me ‘What are you up to?’ And I told them: ‘I’m a video game developer at Rockstar games.’ They said, ‘We’ve started a company and you should come and work for us.’ I thought, oh man, I I’m doing what I love — making games, so I’ve got to stay on that path.”

“But they kept on me over the years. They would be like, ‘Hey, so, we’re growing, and we need a guy like you.’ It turned out, they were having a challenge developing a digital takeoff application… these really large, blueprint drawings that they needed to display and manipulate on a computer screen.

“They figured I had the background to tackle this because I’m doing video games. So, they asked: ‘Maybe you could take a crack at it?’ I thought, wow, this sounds like a chance to actually do something productive with my skillset!”

Another interesting story comes from Plexxis’ current legal counsel, Eric Nguyen. He joined Plexxis at a time in his career when, although still young, he was ready to retire from law. Plexxis, however, was an opportunity just too good to refuse.

“Chris (the CEO of Plexxis) and I lived at the same, condominium complex and were both on the condo board of directors. Over the years, I had helped Plexxis with their corporate work and guided them on matters such as how to structure their business. That was pretty much how the relationship started. I’m actually very proud of Plexxis because I’ve seen them grow from a start-up software company to the success they are today. To see them where they are now and knowing that I helped them and guided them makes me very proud,” says Eric.

“In 2014, when, I decided to retire. Chris just asked if I would, like to just pop into the office once or twice a week or whatever — just to have a presence at the office. So, so I accepted, so that was how it started. And today I’m still here as in-house corporate counsel for Plexxis.”

From milking cows to making software

At Plexxis, great origin stories begin with our founder himself. An MIT grad? Software whiz kid? Nope. CEO Chris Loranger started his career as a dairy farmer in northern Ontario – until a startling revelation caused him to change career paths.

Ultimately this startling discovery led him to launch Plexxis with his cousin, Jason Fraser.

Most notable among origin stories are those who come to Plexxis, not because of chance meetings or past connections with the leaders, but because of that special something. There are some individuals who simply shine out with a unique potential that we find impossible to ignore. Like Farrah Merchant, our programming coordinator:

“I was new to the country and a new mom. Plexxis just came from somewhere into my lap. It was a chance that I wanted to take. Actually, more accurately, it was a chance that Plexxis took with me. Now, it’s going to be like close to seven years and I don’t regret a single day.  I’m just glad that I took this chance, and they did their part for me.  After seven years, I’m not wanting to look for something new. I just can’t be more thankful to have found my career here.”

Not all our Plexxis people bring dramatic or earth shattering stories. But they do bring THEIR stories. And the way we seek out people with interesting backgrounds and wide-ranging experiences –and bring them together on winning teams is pretty magical. That’s really at the heart of our success story. It’s all about SUPER-people. Plexxis Superheroes.

Do you feel a sense of destiny, drive – or simply an urge to join forces with an amazing team?

Whatever your story is, we would love to hear it!